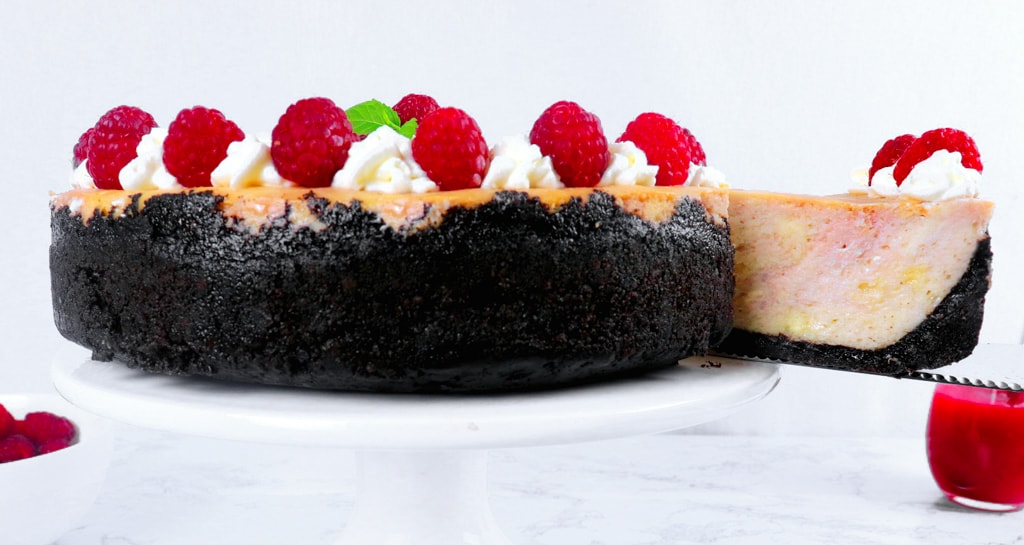 Cheesecakes are by far my favorite dessert to make. I love how delicate and effortlessly beautiful they are, not to mention delicious. One of my favorite parts is coming up with new ideas for cheesecake flavors (I still believe that my caramel cheesecake is the best thing I've ever made).

I don't know if it's because Valentine's day is coming up, but lately I've been obsessed with chocolate, and pairing chocolate with fresh fruit is always a good idea! So, what could be better than a white chocolate raspberry cheesecake? Not much, if you ask me. 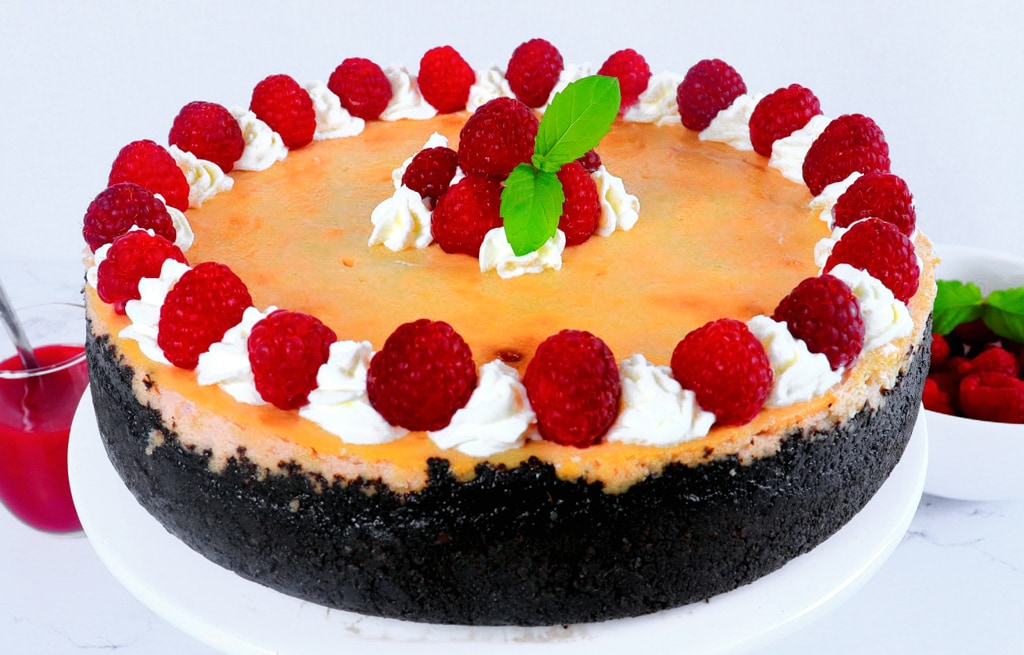 A water bath, or bain marie, is when you bake something inside a larger pan and surround it with boiling water. It's most often used when making delicate desserts like custards or cheesecakes. Basically, no matter how hot your oven is, the temperature of the water doesn't get higher than 212°F. This allows for slow and even baking which lets the inside cook without the outside getting burnt. A water bath is also key in preventing cracks from forming on the surface of the cheesecake.

To keep water from seeping into the pan from the water bath, make sure you wrap it very well with several layers of heavy-duty aluminum foil. *Note: No matter how well you wrap your springform pan, there's still a chance of water leaking into the pan and ruining your otherwise perfectly good cheesecake. This has happened to me a few times and so now I always follow a trick I learned thanks to lifeloveandsugar, which is to tie a slow cooker liner around the pan first and then wrap it with aluminum foil. My cheesecakes have been perfectly dry ever since!

How to Avoid Cracks in Cheesecake

1. Preheat your oven to 350°. Line the bottom of a springform pan with parchment paper. Tie a slow cooker liner around the pan, and then wrap several layers of heavy-duty aluminum foil around the pan and around the sides. Begin boiling water for the cheesecake water bath.

2. Make the raspberry sauce: Add the raspberries and sugar to a small saucepan. Cook and stir until the raspberries release their juices. About 3-5 minutes. In a small bowl, whisk the water, cornstarch, and lemon juice and add it to the saucepan. Bring the mixture to a boil, reduce the heat slightly, and cook and stir until the sauce thickens. About 5 minutes. Immediately strain the sauce through a sieve. Use the back of a spoon to push as much of the liquid through as you can.

3. Make the Oreo crust: Add Oreo cookies to a food processer and pulse into fine crumbs. Mix the crumbs with the melted butter and press the crust into the bottom of your prepared pan. Use the bottom of a clean glass to pack it down tightly and evenly into the bottom and slightly up the sides of the pan. Prebake the crust for 10 minutes.

4. Make the cheesecake filling: In a large bowl, beat the softened cream cheese with the sugar and the flour. Mix in the room temperature sour cream until smooth with no lumps. Add the room temperature eggs, one at a time, and mix until just combined after each. Mix in the vanilla extract and freshly-squeezed lemon juice until evenly combined. Scrape down the sides of the bowl as needed. Chop one of the (3.5 oz.) bars of white chocolate into small pieces and use a rubber spatula to fold it into the cheesecake batter.

Coarsely chop the second (3.5 oz.) bar of white chocolate, place it in a bowl, and microwave in 30-second intervals, stirring between each, until melted and smooth. Add half of the raspberry sauce (about ¼ cup) to the melted white chocolate. Microwave the sauce in 15-30 second intervals if needed until melted and smooth. Pour the white chocolate raspberry sauce into the bowl of cheesecake batter. Use a chopstick or a butter knife to gently swirl the sauce around in the bowl of batter. Just enough so that there are ribbons of sauce evenly throughout the batter, but not so much that it gets fully mixed in.

Slice and serve cheesecake with the remaining raspberry sauce. You might want to reheat the sauce a little if it's too thick.

Keep leftovers, covered tightly, in the fridge for up to 5 days. Enjoy! 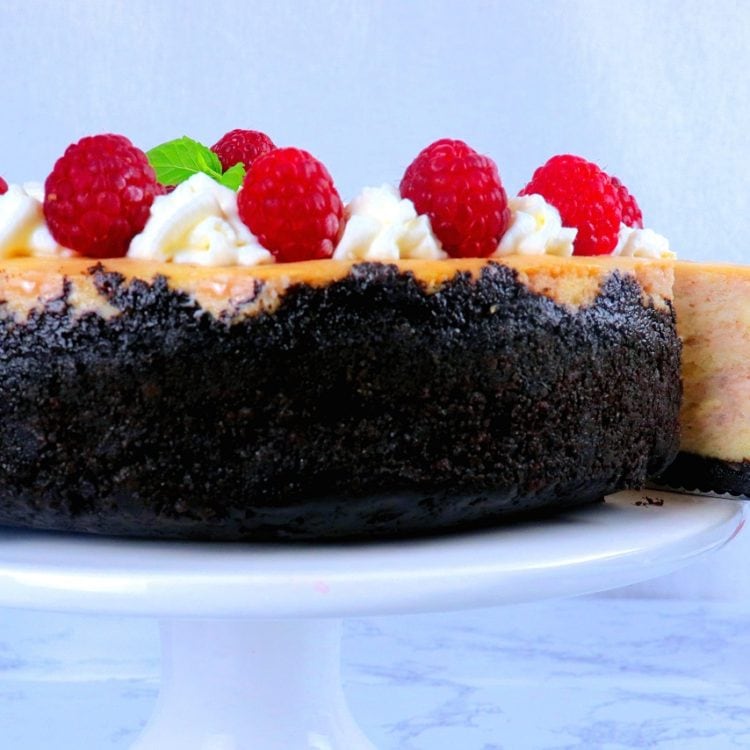 It's crucial that your cream cheese and eggs are at room temperature. To quickly bring cream cheese to room temperature: Place the foil-wrapped cream cheese in a bowl of lukewarm water for about 20 minutes. To quickly bring eggs to room temperature: Place them in a bowl of lukewarm (not hot) water for 5-10 minutes.  *Wrapping a slow-cooker liner around the springform pan adds extra protection against water from the water bath leaking into the pan. Don't open the oven door at all while the cheesecake bakes during the first 1 hour and 15 minutes, then you can open the oven door and gently jiggle the pan to check for doneness. The cheesecake should be slightly golden around the outside edge and there should be a 2-3" wobbly center. If the entire cheesecake is still very wobbly and pale, continue to bake it for another 10-15 minutes and then check it again. Be careful not to overbake.  Leftover cheesecake can be kept, covered tightly, in the fridge for up to 5 days.