Classic Quiche Lorraine is a savory egg custard that starts with a buttery, flaky pie crust and is filled with chopped bacon, sauteed onions, and shredded Gruyere cheese. It's perfect whether you're serving it for breakfast, brunch, lunch, or dinner. 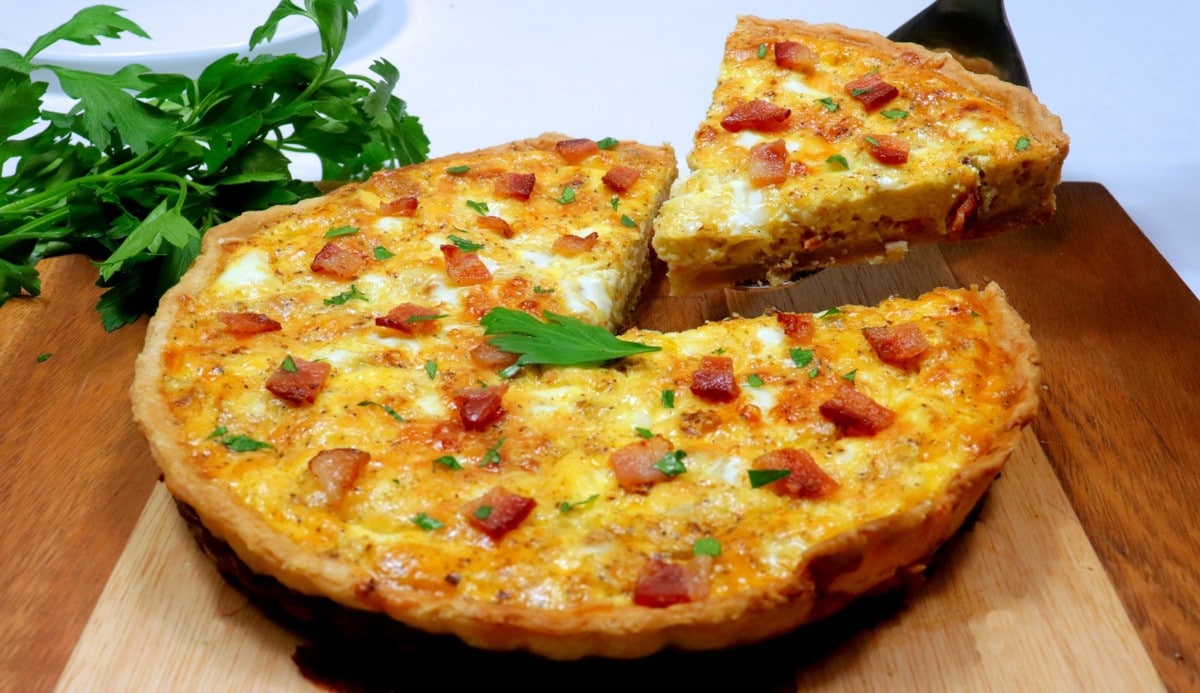 Quiche is a mouth-watering classic brunch dish that is like an omelet made in pie form. It can come in many different ways, but the classic quiche Lorraine is one that's tough to beat. 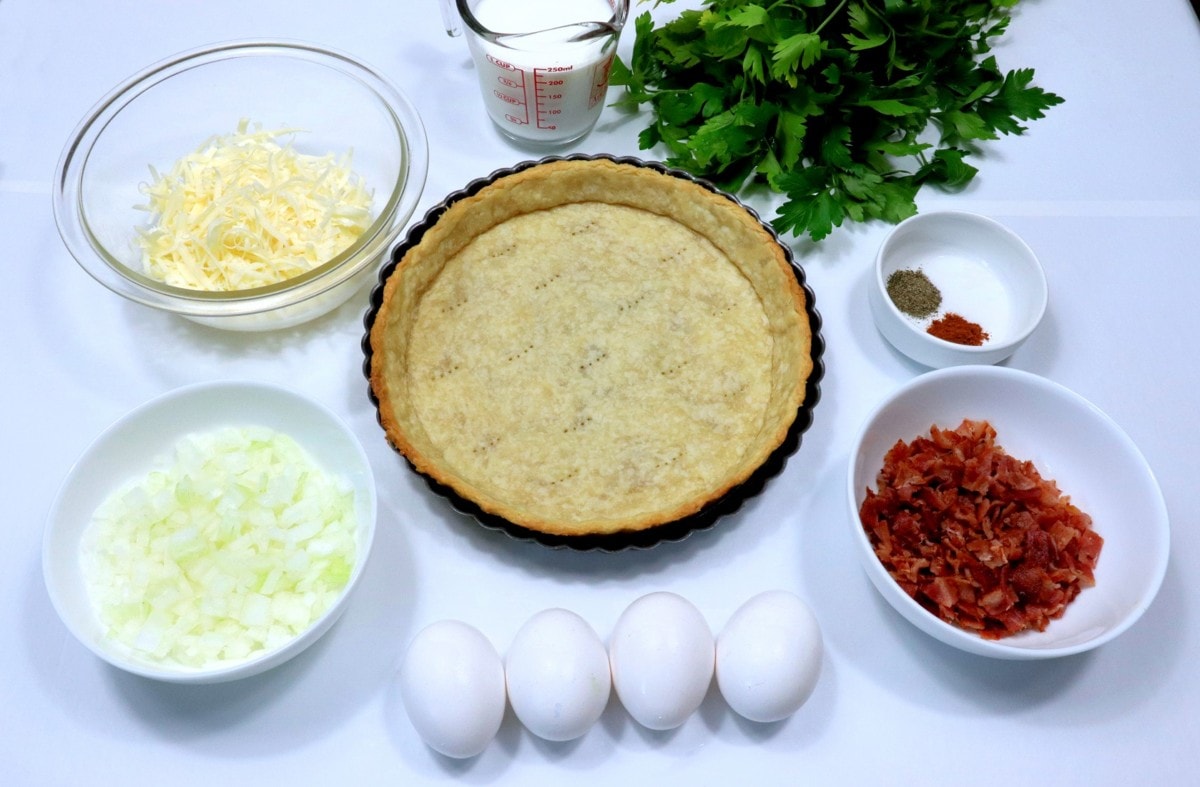 A  tart pan is optional and makes the quiche look extra fancy. It also has a removable bottom which makes it easier to transfer the quiche to a serving plate. If you don't have a tart pan you can also use a shallow 9" pie dish. Prepare the pie crust in advance so it has time to chill, you can also use a 9" store-bought or frozen pie crust.

How to Make Quiche Lorraine: 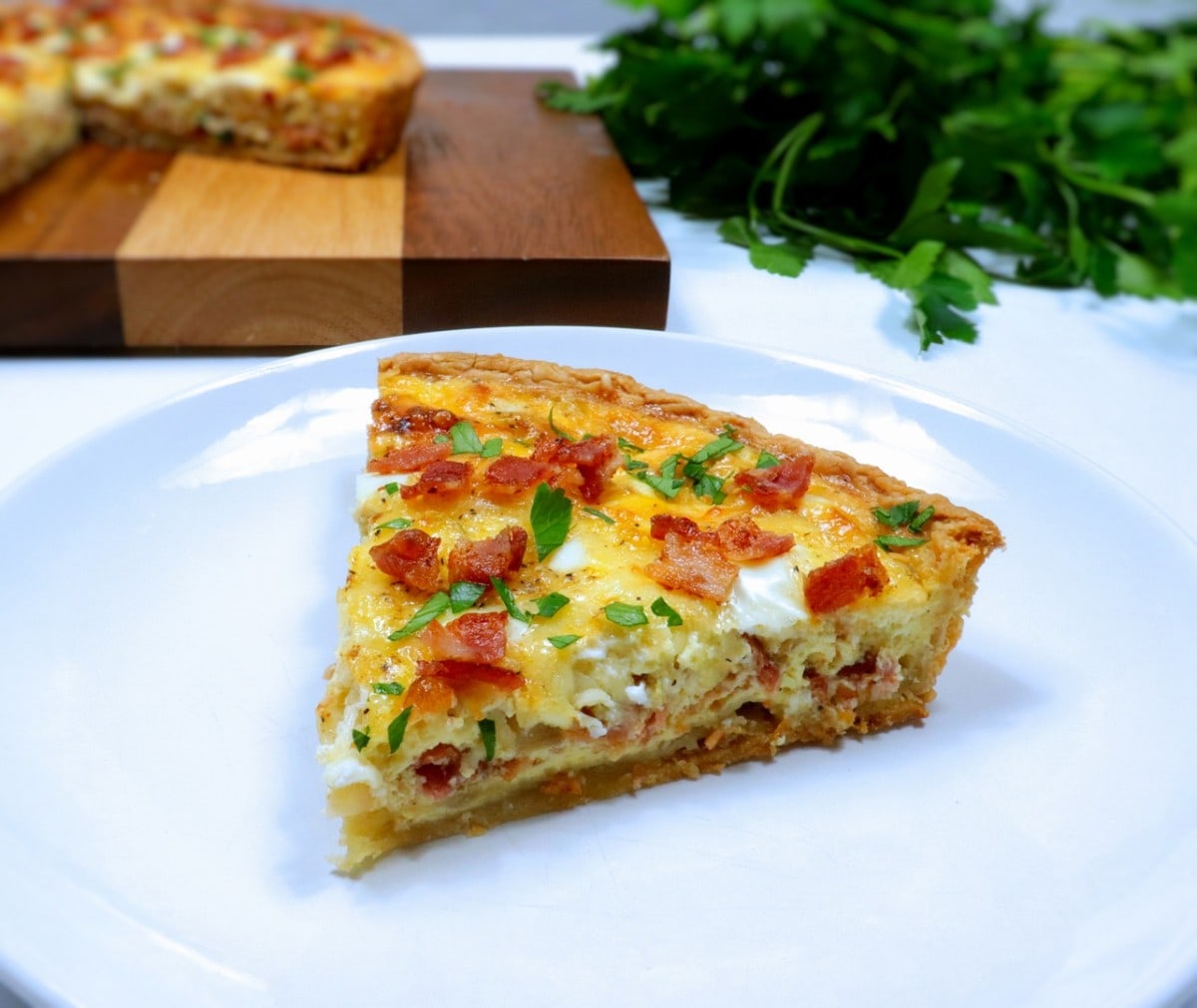 If using a homemade pie crust, roll it out on a lightly floured surface into an 11" circle and press it into a 9" tart pan with removable bottom or a 9" shallow pie dish. Freeze for at least 30 minutes and up to 24 hours. Poke several holes in the bottom of the pie crust, cover with parchment paper and fill with pie weights or dried rice or beans. Keep it in the freezer while you preheat the oven.

Preheat oven to 425°. Bake for 15 minutes, remove parchment paper and weights and bake for another 5 minutes. While the crust is blind baking, prepare the rest of the ingredients.

Cook the bacon in a large pan until crispy on both sides. Remove and set aside. Discard all but 1 tablespoon of the bacon grease. Add the chopped onions and saute until soft. About 2-3 minutes. Once the bacon is cool enough to handle, slice it into bite-size pieces.

In a large bowl whisk to combine the eggs, half & half (or half milk half heavy cream), salt, pepper, and paprika.

Assemble and bake the quiche:

Remove the crust from the oven and reduce the oven temperature to 375°. Spread the chopped bacon evenly in the bottom of the prebaked pie crust. Then add the onions and the shredded cheese. Pour in the egg/milk mixture. Be sure not to over-fill it. It's okay if you have some egg/milk mixture leftover. 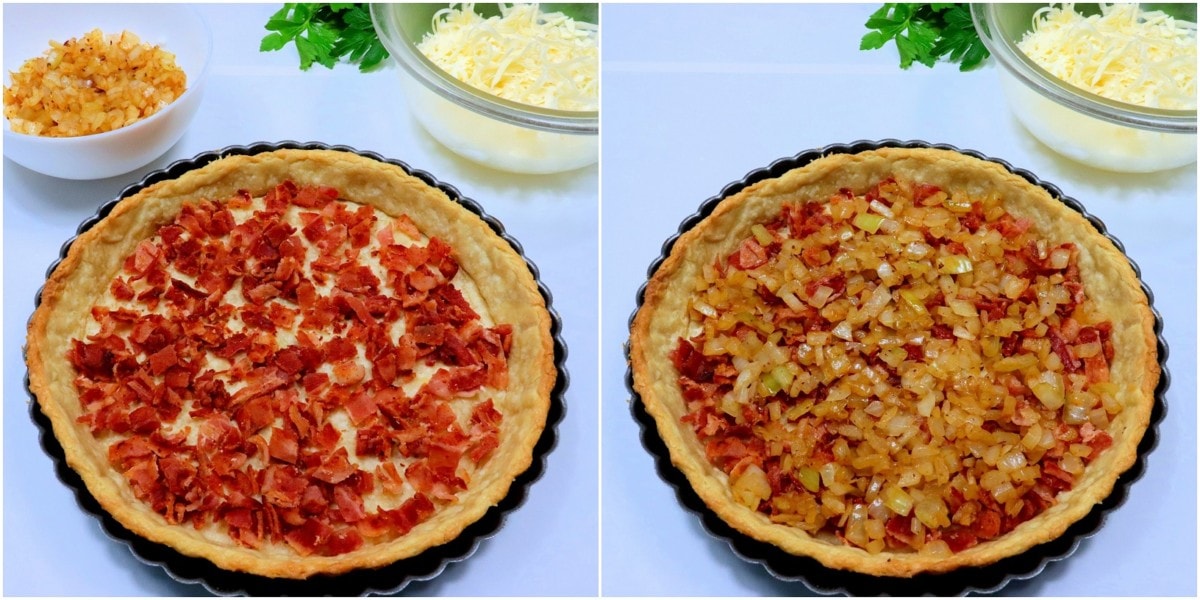 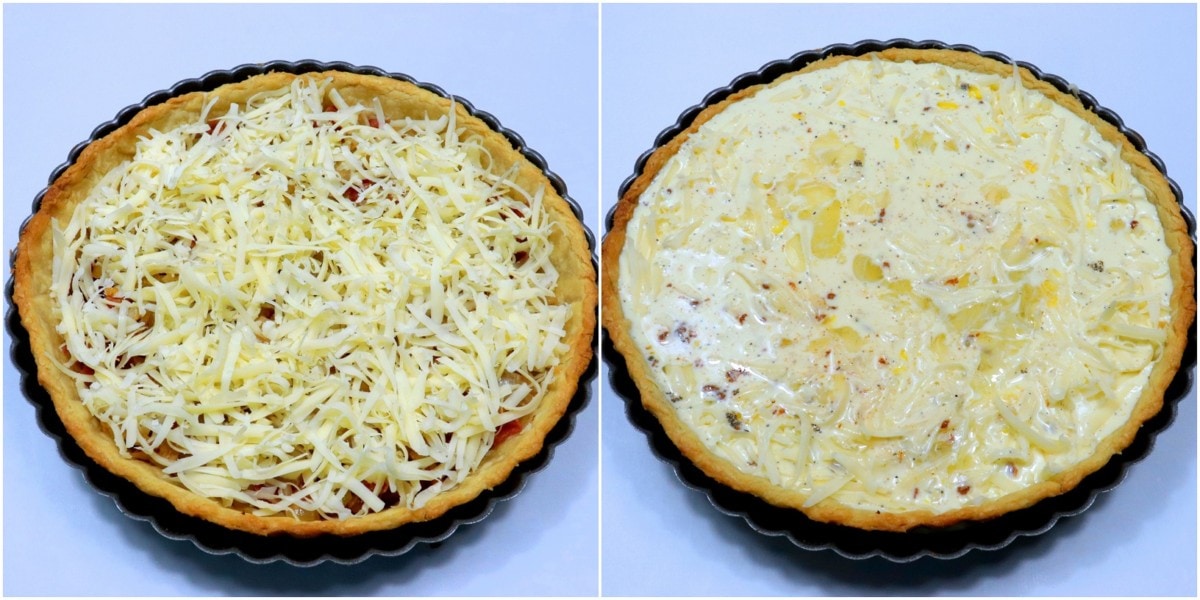 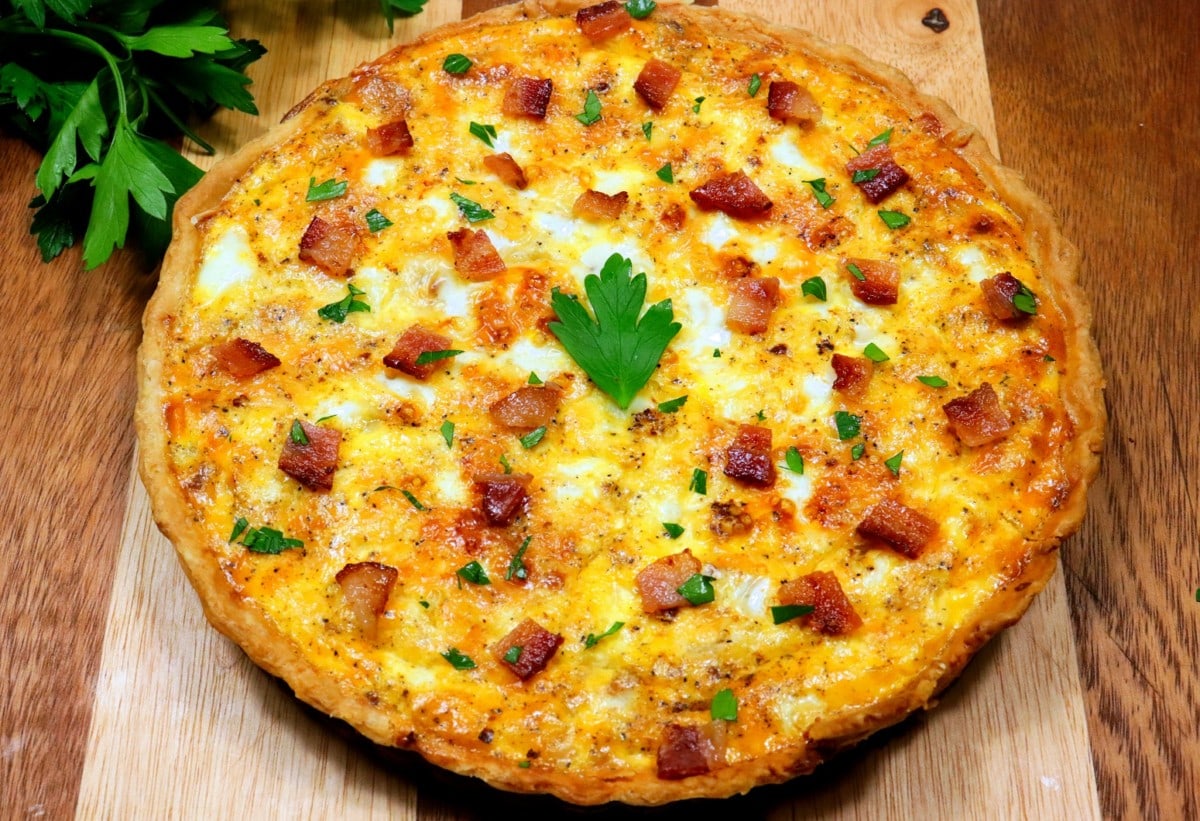 Can Quiche Be Frozen?

Yes! Quiche freezes beautifully and is great to have handy for a quick breakfast, lunch, or dinner.

To freeze: Once cooked, allow the quiche to cool completely. You can freeze it whole still in the tart pan or pie dish and cover tightly with plastic wrap and aluminum foil, or remove it from the pan and place into a large ziplock bag. You can also freeze individual slices kept in ziplock bags. To reheat: Bake the quiche from frozen, uncovered, in a 350° oven for 25-30 minutes until heated through. Do not thaw before reheating. 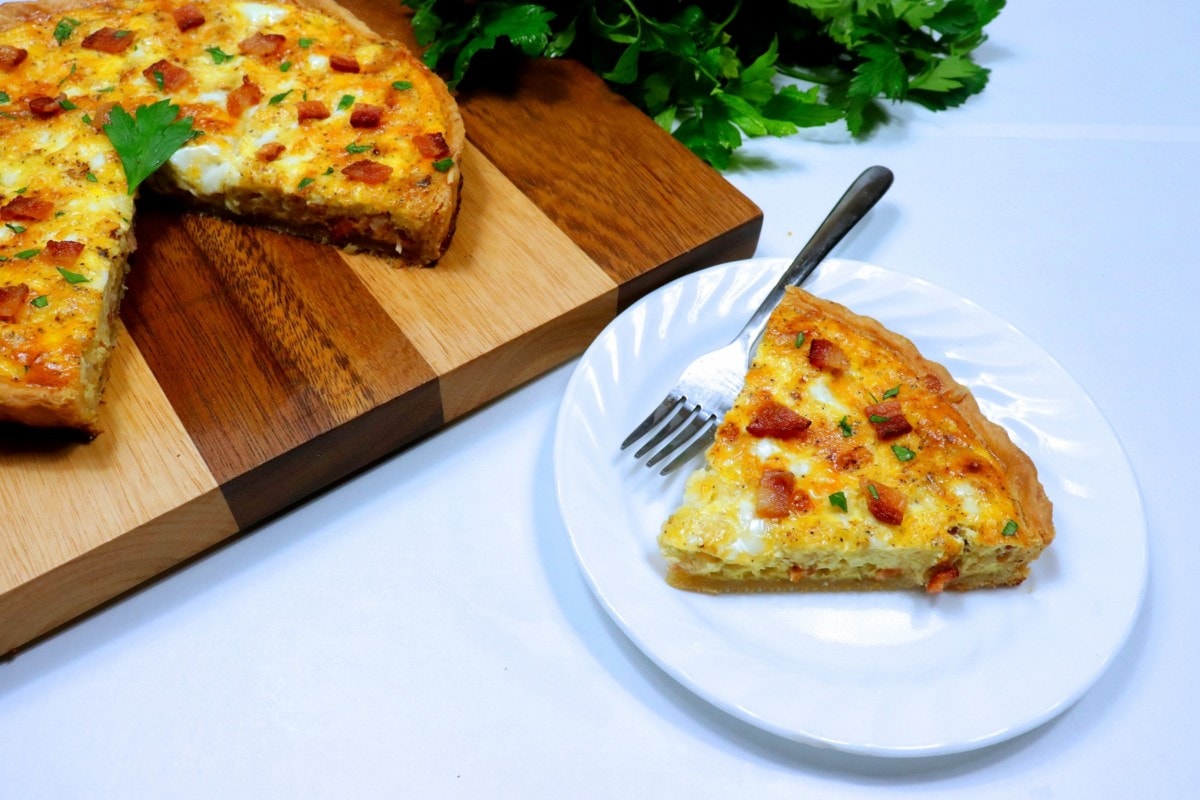 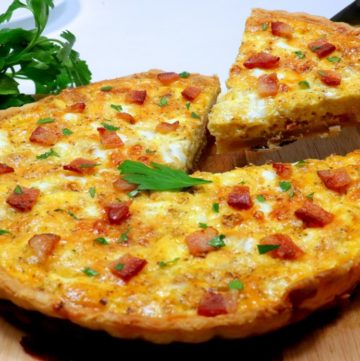 * You can also use shredded cheddar cheese for a milder flavor or a combination of swiss/Gruyere/cheddar.  Leftovers last, covered, in the fridge for up to 3 days.